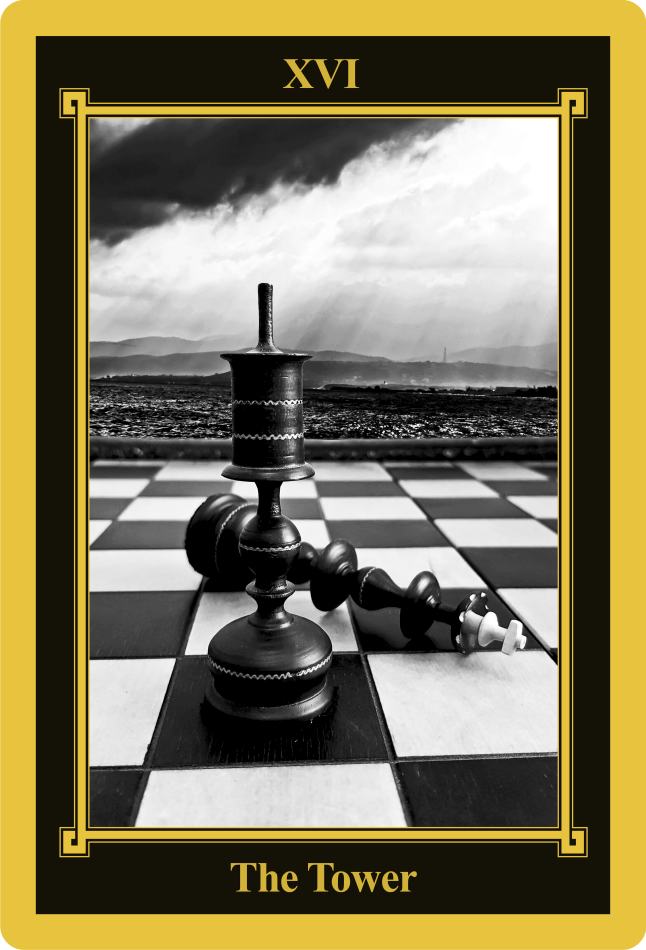 Inspiration for the interpretation of the card „Tower”

For illustration of the card “Tower” I chose one of my own experiences.

I thought long and hard about which of my experiences would correspond with the meaning of the card “Tower”. I might be an orthodox Scorpio born on the tenth of November, who is expected to have big rises and falls, But zodiac signs aren't everything, in the end it is always up to us to make life work for ourselves. I am who I am. Fortunately. If we all acted predictably, we would be too vulnerable to manipulation.

And I will confess, as a sociologist, it has always appealed to me. To predict people's behaviour and to therefore have the ability to manipulate them.  It happens to up to a certain point, I saw that in the world of advertising. But fortunately, I am speaking against myself professionally, we might be group thinking creatures, but also always individuals. Every time someone creates a system which would control big groups of people, even if it might look perfect, someone else comes up with a way how to get around it.

I am unfortunate in that I look like an artist and so everybody thinks I must be unsuitable for real life, because what I want has no real foundations. Just like the tower.

They took away my driver's licence because of typical inattention,  which happens to a lot of people. I told my friends.

“And you're surprised? It's normal for you going up and down,” they laughed.

“You're an artist, right?” said strangers in a restaurant where I was having a beer. They had seen my moustache and long hair.

“Come have a shot with us for inspiration,” they laughed.

I smiled at them, looked at my watch. It was nine. Time to go to bed. So I said goodbye and disappeared. I went home, because I like my routine.

The card “Tower” says that when you don't have foundations, everything can fall down on you like a house of cards. From the point of view of others, things in my life have fallen down many times. That's what they thought.

I remember a situation when for the first and last time I was without money. At the time, I needed to get enough for about two months. I sold a couple of antiquities which I later regretted, but to be sure I visited two friends who were businessmen.  I never beg, I just hoped they would believe me and help me out. I described my situation to the first one.

“It would be best if you ran away before they lock you up.”

I went to see the other one.

“You can never make it. But you're always either up or down, so you probably don't even mind.”

At first, I felt sorry, but in the end it was a good motivation.

“Believe in yourself, you can do it. You just need to focus, be positive and work patiently.”

And ten years later I managed to pay off my debts. I visited both friends one more time.

“You really made it? Congratulations,” was the answer from both. And I was so proud of myself that I could do it even without their help. It was all thanks to good foundations. I believed in myself.

How many times we tell ourselves that we cannot solve this problem, that we simply cannot take it anymore. And then it turns out we can. But as sportsmen would say, it's all about training. Even your subconscious has to be trained. Then we can listen to our intuition which act like its spokesperson. That's why I'm glad that my biggest rises and falls – distaste for life, suicides and rehab – came when I was nineteen and I was still looking for myself. All my falls after that had their  limits which I never crossed. And that is why I humbly thank for everything I went through in my life and what I still hope to experience.